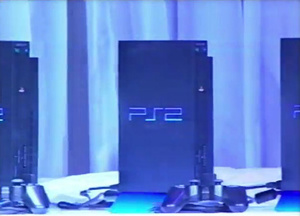 Sony has uploaded the second part of its 'Evolution of PlayStation' series, covering the incredible success of the PlayStation 2 console.
The first video released by Sony on the history of PlayStation ahead of the PS4 launch event, covered the beginning of the brand with the 1995 release of the original PlayStation.

This video covers the world's most successful video games (home) console, the PlayStation 2. It has sold more than 150,000,000 units worldwide, and has a library of more than 10,000 games. You probably have one gathering dust somewhere now, but when it launched in 2000, the PS2 came with the emotion engine providing excellent graphics improvements, and of course a coveted DVD drive, providing far more capacity than the 700MB discs that contained PS1 games.

Supporting playback of DVD-Video was also huge in 2000, and Sony later went on to release the EyeToy add on, and the network adapter that provided online play for compatible titles.

Watch the video of the biggest selling home console of all time.

the legend! guess its official with these videos ps4 is here!

http://en.wikipedia.org/wiki/List_of_best-selling_game_consoles
not the best selling ever!

Originally posted by Burnasty: http://en.wikipedia.org/wiki/List_of_best-selling_game_consoles
not the best selling ever!

They said ONE OF. Not the best.

Originally posted by Burnasty: http://en.wikipedia.org/wiki/List_of_best-selling_game_consoles
not the best selling ever!

It's the best selling HOME console ever. If you count the DS as a gaming device that has sold more, but the PS2 has sold more than any home console in history. So this one I didn't get wrong :-)
Comments have been disabled for this article.