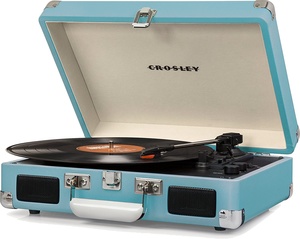 In recent years, as physical music media has largely disappeared from use and from stores, there's been one exception that has seemed to cement itself with a surprisingly strong foothold.
While CDs have been crushed by streaming services, people still find use for old vinyl records. Perhaps it is the fact that they are the most tactile, physical media and the opposite of where the mainstream is now.

Austria based company Rebeat Innovation is trying to hit this niche with a new product it has collected $4.8 million in investments for. The technology, dubbed High Definition Vinyl, is said to be a better version of the age old method of listening to music.

The HD vinyl is said to provide a richer, more authentic sounds with higher peak volumes compared to traditional vinyl records, Pitchfork reports. It is unclear how the higher volume is managed but the company says the technology increases the amplitude up to 30 percent.

Rebeat patented the technology already a couple years ago but now with new interest from investors is managing to bring it to the masses. The basic idea is that recorded audio is transformed into a topographic map which in turn is carved into the record with a laser.

This technology optimizes the surface area which means that you can record up to 30 percent more music while retaining the size. The discs are playable with all normal vinyl players.

The company also doesn't forget to mention that there's no need for chemical treatment, unlike with old vinyls, so it is more environmentally friendly, which might interest people.

According to Rebeat the new HD vinyls will be hitting stores in 2019.

I look forward to those who insist records sound better than CDs stumbling over themselves to explain why the new records sound better. It might be a challenge since those same people won't be able to tell the difference between a CD and a 160K MP3 that is much lower quality than the original CD track.

"You know, it seems that quotes on the internet are becoming less and less reliable." -Abraham Lincoln.
418.4.2018 13:22
biver
Send private message to this user
Newbie

I guess I will have to buy the White album again.

HD Vinyl may sound better than CD audio, DVD audio or digital audio but one scratch and you're screwed.

I wonder how a skipping record sounds in HD......

Originally posted by scorpNZ: Vinyl is better the evidence is the crackling/popping you can hear which you don't get on CD or digital media

Which is exactly why compact discs came about.....Most people want to hear music and not the crackling or popping sound of the record needle moving over the record surface......