Recent headlines | Ruling: Google Analytics is illegal in Europe
AfterDawn > News > Review: The Pebble Steel is a fantastic smartwatch, but will it hold up in the future?

Review: The Pebble Steel is a fantastic smartwatch, but will it hold up in the future? 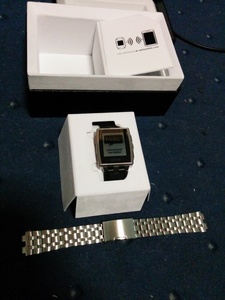 Pebble, the Kickstarter record holding company for top funding took to CES earlier this year to announce they were coming back for round two of their popular smartwatch, with the new device aptly named Pebble Steel due to its metal watch band.
The company released their first watch to great fanfare and curiosity in 2013, and eventually sold 300,000 units. There was a few major issues with the watch, however. First, it was ugly. There is no nicer way to put it. Aesthetically unpleasing and build quality was also lacking. Second, following a delayed launch as the startup company worked out the kinks, the final product shipped out was still very buggy and Pebble forums were inundated with complaints and cries for help. Finally, apps and partnerships were nearly non-existent.

For what the smartwatch was built for: reading texts, controlling music, seeing emails and of course, telling time, the original Pebble worked admirably. Finally, it also cost $150, which was well within the "impulse buy" range of many early adopter techies.

For its Pebble Steel, the startup has raised the price (to $250) but for the most part fixed the issues that plagued the original's launch. Overall, we easily have the best multi-platform smartwatch built, to date. 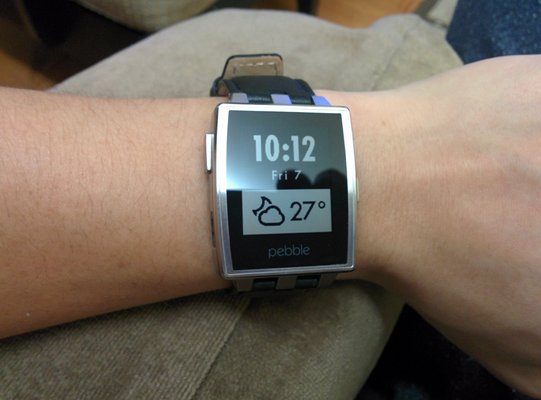 For the most part, the specs for the Pebble Steel are almost identical to its predecessor.

The device has a 1.26-inch 144 × 168 pixel black and white e-paper display with a backlit "transflective LCD," an extremely low-power CPU, a waterproof rating of 5ATM (35-40 meters in salt or fresh water) and an RGB Led notification light. 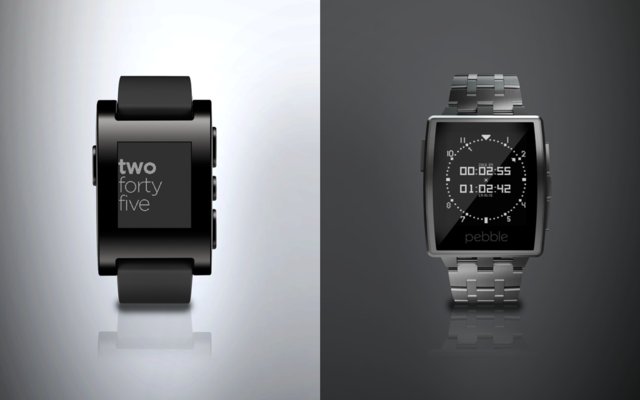 From a design standpoint on the actual watch face, the button layout is exactly the same, with the proprietary charging port and back button on the left side, and up/down/select buttons on the right side. The bezels have been reduced, the Pebble logo has been subtly added to the lower portion of the screen, and the smartwatch has a nice brushed aluminum look. Pebble has gone a long way to making the smartwatch business casual, taking away the inherent geek-iness of wearing such a device. The leather and metal bands are both nice, depending on preference, but I will say the screws in the toothed design are so incredibly small and tight that once you find your favorite, you will probably keep that band only. This is also a negative from the original Pebble, which allowed you to replace the band with any 22mm band you may have had laying around.

Battery life is solid, even if you are a very busy texter and emailer. 5 days of battery life is the norm, but 7 can be had if you get less popular and keep a basic watch face. By pairing your phone with Bluetooth LE, expect an extra 8-10 percent drain on your phone over the course of a day. 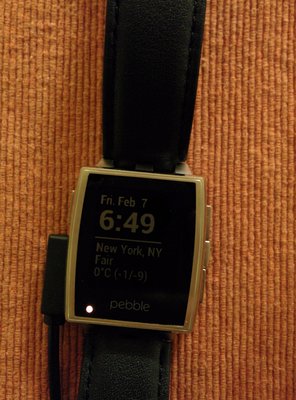 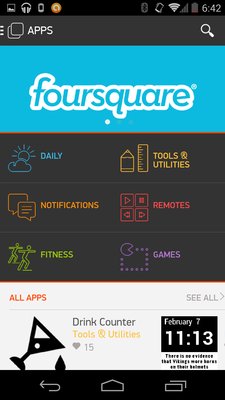 Pebble really improved the software experience for the device, with brand new versions of the iOS and Android apps and a brand new app store. The updated apps blow the originals out of the water, and show a great concentrated effort from the developers.

Android's app is in beta, and occasionally that does shine through, but for the most part it was a pretty seamless experience. After logging in, you are taken directly to your "locker" which shows all your installed apps and watchfaces. Since you can only keep 8 apps at a time (there isn't very much internal storage), you have to decide what you will use the most. Pebble Cards is a must-have app for the smartwatch, which allows you to customize the face with the time, weather, date, and then gives the ability to flip through cards which include your own notes, your Google calendar, battery life and even stock tickers. While Cards is the most popular app for the watch (and likely its best), the experience has not been perfected and loading times for the cards and just getting the sync perfect still needs work. 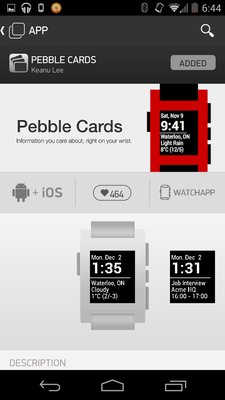 There are new partnerships, as well, for brand name apps. There is Foursquare, Yelp and ESPN, among some others, and all "work" but really it's still a clunky experience trying to use any of them on your wrist and having to click multiple times is really not worth it. Many apps also require an app to be downloaded on your iOS or Android device, which takes away some of the ease but there is certainly a good foundation for future development.

Android also allows for plenty of customization through third-party apps including remote camera shutter and sending pre-written texts and emails as quick responses. These are very cool features, but require better integration into the future. 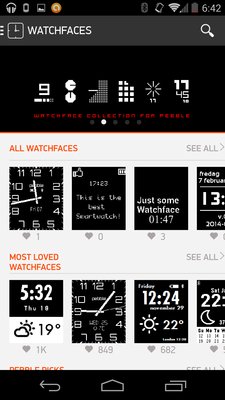 The Pebble Steel is the best smartwatch available on the market now. Being the best smartwatch as of February, 2014, has its perks of course, and Pebble should be commended but there is expected to much, much bigger competition expected this year in the form of Apple, LG and Samsung. The Samsung Galaxy Gear was a critical failure, but Samsung was just testing the waters. They will not make the same mistakes again. LG already has some of the best Android UI features, and if that can be extended to the watch they will have a potential hit on their hand.

That leads us to Apple. There have been rumors of an Apple wearable since at least 2012, and CEO Tim Cook has promised new products in new divisions this year, leading most to believe that Apple's iWatch will finally be a reality. No matter your thoughts on Apple, there is no doubt an iWatch will be a game changer. If Google and Microsoft decide to get in, it will once again be a three team race with no space for Pebble, unless the company can continue to build on the early lead it currently has.

Overall, the Pebble smartwatch is fantastic for the basics, and the new design is really nice enough that you can get away with wearing it for dressier events. The e-paper display is cheap and backlight is just "too blue" and it is not hard to imagine how obsolete the screen will feel when touch screen OLED models are out in the future. The proprietary charger and the not-so-easily replaced bands are annoyances but not dealbreakers. The beta appstore is a very strong start, but the software feels beta at times, with lag and timeouts. The Pebble Steel is more polished than the original, and it really is the best smartwatch around, but the competition is coming.

Specs 6/10
Design 9/10
Software and ecosystem 8/10 (will likely be higher when out of beta)
Tweet
Tags: AfterDawn Review smartwatch Pebble Steel
<Finnish police probe Wikipedia's donation requests >Following massive success of game, 'Flappy Bird' developer calls it quits and will shut it down
Previous Next Write a comment
Comments have been disabled for this article.