VIDEO: Sony looks back at PSP, forward for PSVita 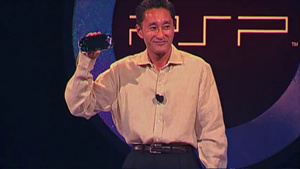 It touts the PSP's large screen (for a handheld) and its ability to deliver console quality gaming for a handheld device.

As for the PSVita, it focuses more on its social integration and so forth, but clearly the PSVita is an unfinished story.

its today!!! well here in my country xD

ok ok ok hold on lets take a look at this for a second:

psvita back to 2 joysticks.

actual different in ALL PS gamesystems. the look of the case.... graphics bump just a bit...... not much else... i dont call that evolution.. im sick of these game company saying there system is the NEXT GEN when it hasnt done anything different from last years pile of shi*. the new wii u is something twards that.. with an on screen controller. but still kiddie games and graphics. i will buy a wii u before i touch a ps4 or then new xbox ESPECIALLY if they cant play used games.. there goes over 60 of the gammers. since alot dont even FUCKING HAVE INTERNET YOU M$ DOOSHBAGS!